Have you seen Vodafone’s new campaign? It uses the insect, Mayfly, as a metaphor of a life lived to the max and in the here-and-now. If you haven’t seen it yet, better check their website first before continuing to read my piece. http://www.vodafonemayfly.co.uk/

I first saw this ad in the cinema while waiting for Harry Potter to begin. Initially, I found it charming: I like computer-generated images in general, and insects can be quite a cute batch. The visuals were nice: the forest was lush and alive, a fantastic playground for our buddy, the Mayfly. It flew around, dived, glided and surfed; did some juggling and tried its hands -– er — or ‘legs’ at tennis. It even fell in love (nice touch, I thought). All these in the span of its one-day life. 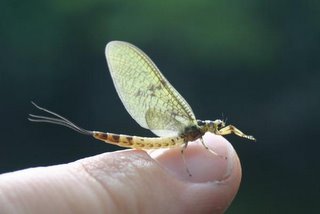 I thought, cute, until I began to listen more clearly to the narration. At the end of the story, the voice-over went: “If we embrace life like the Mayfly, what a life that would be.” It continued: “Make the most of now”, while the word “now” is shown with Vodafone’s logo serving as the letter “o”.

Smart, I thought. But somehow, I found the ad unsettling. The images I saw didn’t seem to match the message. At first glance, everything seemed to fit. So why was I frowning at the end of the ad? How come I didn’t believe it?

After 2 days, that was still my question. I’m a fan of CGI and I appreciate this kind of aesthetics. I’ve also seen a lot of ads where I went “Duh”, “Aarrgghh” and “Eeeuuw”. This one wasn’t even bad — it was charming — but something was definitely bugging me. No pun intended.

So I sat back and performed a dangerous activity: thinking. I dared go a step further and decided that whatever I thought, I would blog it. All my other selves immediately made their objections known: the QB’s – all 9 of them — just wanted to play games and watch films, Sangga wanted to concentrate on deadlines for school and work (she has a point), and Timi wanted to continue writing a novel. But it was too late for my own objections: the seed has been planted.

So, these are my musings:

I miss the element of sincerity in the ad. The Mayfly’s life – and the suggestion of the good life – was romanticized too much. Or actually, it was made too pretty, too pimped-up. Too cartoon. This time the use of animation or CGI didn’t contribute to making it look real. On the contrary, its hi-tech character made it came across as superficial. The voice-over said that although the Mayfly has a life expectancy of one day, it’s not miserable about it and instead, crams its life with doing the things it loves. OK, good message, but still I couldn’t help being sarcastic: how do we know that it’s not miserable? Ok, ok, I don’t require an interview with a Mayfly saying it’s happy…it’s not about that ;-p . But a nice-looking Mayfly on the screen having fun plus a voice-over saying how much it loves doing what it does not make the message more convincing nor authentic. For me, the meaning was forced; the authenticity, lost. The paradox was: because the Mayflower was made too human in the ad, it somehow lost its authenticity to represent a human life.

What’s funny is that in reality, the Mayfly’s life is spent almost entirely in flight and its main purpose is to reproduce. According to good ol’ Wikipedia, its mouthparts are useless and its digestive system filled with air. Fly-shag-die, thus. Not exactly the kind of life many people dream nor love to live.

But this is exactly the life that many people are leading. And hey, I’m not saying this kind of life is bad. The so-called normal and unexciting everyday existence can be full of surprises. Not always as grand as the Hollywood manner, but it can be full of nuances, light and shadows. This is what the ad wanted to say, I guess, but personally, I don’t think it worked. A message as big as ‘embrace your life now’ can’t be captured by a few impressive frames of a computer-generated mayfly that’s prancing around and having fun. In this case, the digital-ness came in the way of storytelling. My brain refused to match the message with the image. It wasn’t so much that it was fake — i knew that — but that it felt fake.

It’s a shame that the Mayfly’s story was lost in the telling. As much as I don’t really favour this particular ad, I still find the Mayfly an interesting metaphor of something that’s hard to obtain. Like living, for example. Really embracing life, that’s easier said than done. I wish the ad focused more on the fact that Mayflies often dance around each other in large groups. This was also featured in the ad and was nicely rendered, but its significance failed to shine in the narrative. I think this would’ve been a better creative and conceptual handle. Imagine showing real Mayflies, ala-Discovery Channel, for instance; and then, at the end, showing how they all converge to dance wildly in the twilight. It’s like a celebration of their brief –- but still their only, and thus, important — lives. It would be like saying: “Hey all you people bemoaning your dreary existence, you still have the chance to participate in the Great Dance of Life! So stop dragging your feet, embrace life, make the most of now. Dance magnificently, dizzyingly, madly!”

That I would’ve bought. That would’ve inspired me.