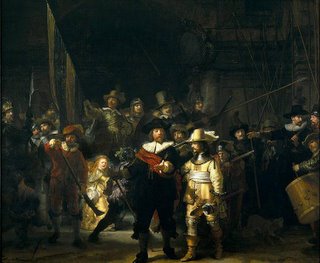 Its full title is: ‘The Company of Captain Banning Cocq and Lieutenant Willem van Ruytenburch’. In this painting, the young Lord Van Purmerland as Captain orders his Lieutenant, the Lord Van Vlaerdingen, to march his company Civilians. The popular title, The Nightwatch, is actually a nickname earned by this painting because of its striking depiction of a (supposedly) night scene. It was however coated in dark varnish, which made it unusually darker than originally intended. Some articles state that it actually depicts a day-scene.

I’m no expert on Rembrandt, so I won’t delve into the details of this painting’s history. I’d like, however, to focus on two elements relevant to a discourse of visual culture, namely: perspective and narrative sequence.
Perspective was used in this painting as a practical method to realistically capture the moving out of the Company. The right proportions and distances were used to promote its logic to the spectator. Although colossal in size (363 x 437 cm), the painting still conforms to the standards of pictorial perspective at that time. Its size however makes it better viewed from a distance. As such, it gives the impression that the scene — the pictorial space — “…is continuous with the viewer’s position in real space.” (Lister 2003: 127)

However, perspective is also used here as a symbolic form. The play with light and shadows, and dark and bright colours captures the eye and focuses it on the centre of the painting where the most important figures are depicted: the two men and the small girl in the centre left background. They were thrust from the anonymity of darkness to the foreground, the light of recognition shining upon their figures. Their significance in the painting is immediately obvious.

The painting also effectively impresses a sense of movement and creates a narrative sequence in a single space. The canvas reflects a bustle of activity and evokes an atmosphere of excitement through the contrasts between light and dark, bright and dark hues and a variety of positions, gestures and facial expressions. It departed from the customs of that time which favoured a static mode of painting rows of figures for the corporate portrait. In doing so, it managed to reflect the dynamism of the narrative: the Captain giving orders, the men preparing their musket, some shooting, the flag proudly displayed, and a drum roll about to start— a Company come to life and beginning to march.