I heard the terrible news on Saturday afternoon from my mother during my regular weekly phone call.

Ay, so many people have died, she suddenly interjected while I was rambling about how I have yet to find a place for internship. What, who, where, I rapidly fired back.

During the anniversary of ‘Waw wa wi’, my mom replied.

What’s that? I asked, thinking it was some new Korean soap opera or a religious cult of some kind. It’s a game show, she said. A game show for the poor.

Later I found out that the program was called ‘Wowowee’ — the wow’s, ooh’s and whee’s stemming from the incredible prizes the show has been giving away. A P2.5-million house and lot package (est. 40,000 euros), P1 million in cash (est. 16,000 euros) and a passenger jeep were to be the top prizes in what would have been the show’s first-anniversary celebration.

Thousands were camped outside for days, the poor majority of my country, coming from provinces far away in the hope to get a free entrance ticket and a chance to play in the show. Thousands came — some with modest wishes, others big dreams — but each one believing in the chance to end poverty, if not to keep it at bay, even for just a day.

Instead, the frenzied build-up of dreams exploded into a deadly rush.As of this writing, 74 people were killed and about 500 were injured when the thousands of people lining up to enter the Philsports Arena broke into a stampede. The victims were mostly women — middle-aged or elderly housewives looking forward to an entertaining and, perhaps, lucky day. 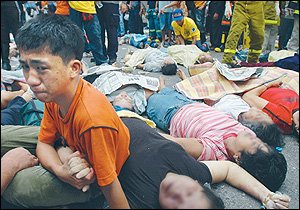 I’ve personally never seen the show, but after learning about it from my family and the news, I can imagine how it’s like. It would be a combination of popular game shows like the ‘80’s hit “The Prize is Right”, the Philippines’ ‘Pera o Bayong’ (Cash or Bag) plus the heart-tugging character of Make-a-Wish (ala ‘Hart in Aktie’ in the Netherlands). Contestants also have to answer questions correctly, but according to the program-makers, the questions are actually no-brainers, since the objectives of the show are to entertain and to give hope to the people.

‘Wowowee’ is a generous show, making sure so many contestants as possible come out as winners. It’s a show that has, no doubt, touched the lives of the poor in a positive way and, equally important, in the here-and-now; which is sadly more than can be said of the Philippine government. However, I can’t help but wonder if the station (ABS-CBN) realized just what they were getting themselves into when they decided they wanted to be in the business of giving hope to the poor.

I think although the station’s goals — producing an entertaining and popular game show combined with helping the poor — intersected at some levels, these also conflicted with each other. Intentionally or not, the show has made poverty into an entertaining spectacle. By being the game show for the poor, it has claimed poverty — or the end of it — as its unique selling point. And this, I believe, is a dangerous proposition, especially in a land where more than half of its 84 million people live on two dollars a day.

I’m inclined to believe that the show’s producers sincerely wanted to help the poor. But perhaps they’ve overlooked the fact that it’s not entirely wise to serve 1 roasted chicken to a starving crowd, nor try to squeeze 50 drowning people in a lifeboat made for 10. Can a TV show multiply loaves and fishes so that everyone can eat as their heart desires?

Of course, people shouldn’t expect such a miracle. It is, after all, just a game show. It’s neither government nor family who are supposed to guarantee that your basic needs are met and that you get the chance to live a life with dignity. To hope that a game show can end your poverty is to despair. But it was exactly this desperate hope that was unleashed among the thousands who flocked to participate in the show’s anniversary celebration.

Knowing this, the game show organisers cannot escape blame for the tragedy that unfolded. It is a tragedy, because it could’ve been prevented. By playing on the despairs and dreams of the people, the show should’ve been ready for the consequences. True, the crowd was also to blame for lack of sobriety and discipline, but knowing the nature of crowds and how enormous the crowds would be — and especially when hope (and money) is dangled and announced as free for the taking — the organisers should’ve taken measures to instil order in the frenzy and chaos it has helped to create.

There are so many questions to be answered and actions to be reviewed. The Philippine Daily Inquirer raised these important points in its editorial:
• What were the guidelines used to control or manage the expectations of the growing crowd?
• What crowd management procedures were in effect, not only at the time of the stampede, but also during the build-up to the event?
• Were other means explored to distribute the tickets in a less risky manner rather than a first-come, first-served basis?
Another question also begs to be answered, one that looks more into the motives of media in general. The struggle to survive is already an everyday necessity for the poor: why then should they be made to compete against each other in a TV show? I can’t say I know the answer. I’ve said how generous the show was, and generosity is something everyone can use these days. But still, the question keeps echoing in my mind.
But the people didn’t seem to mind, perhaps because being already immune to the ferocity of survival, a game show was actually a chance to rest and laugh again. To cherish that silent hope that perhaps this is one struggle they can actually overcome. This could be a contest where the poor can emerge as winners.

Instead, dreams and lives were crushed.

There are no winners. Only a glaring light that bares the poverty of the Filipino people.