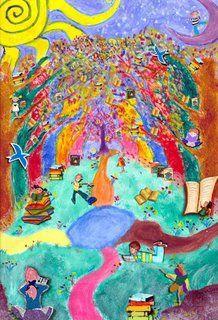 I made this illustration two years ago for a project for Visual Design where we had to create an imaginary state. My team decided to create a magical world for kids, Vettesatisda (derived from the Dutch “Vette stad is dat”, which in English translates to “That’s one cool city!”). This forest is actually a magic library of sorts where children can read or create any story they want, night and day. In the middle of the forest is a magical water source which forks out into streams of chocolate milk, orange juice, lemonade and strawberry shake.

Worth mentioning here is the use of digital manipulation in this illustration. It began as a hand-drawn painting and then was transformed to a digital image. I first painted the forest by hand, and then I added objects and the figures of children. These were scanned from greeting cards and edited to closely simulate the colour scheme and style of the painting.
This illustration is obviously fantasy-inspired. The subject matter, caricature design, and the way some elements of the physical world are exaggerated all reflect hyperrealist aesthetics. (Listers 2003: 143) The colours are bright and the figures are clearly rendered in animation graphic conventions. Some objects are more symbolic and expressively rendered like the sun and moon and the colours of trees. It definitely exceeds verisimilitude.

However, some realist elements still echo strongly throughout the illustration. A vanishing point — the farthest tree in the middle — is used to determine the perspective of the scene. The trees become taller and bigger as they approach the foreground. The figures of children also vary in size depending on their position in the illustration. The use of perspective also enhances the narrative aspect of the picture, showing how the children spend their time in the magic library: some atop the trees, others next to the stream while day and night pass idly by.