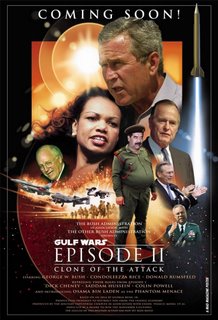 The effect and usefulness of movies certainly last longer than their viewing time. I think movies (TV, videos) have become so ingrained in our society (I’m a film-junkie myself) that its visual recall is so powerful. Our visual literacy makes this sort of posters powerful media. Many people may find it hard to understand the Middle-east conflict, for instance, by just reading the news; but coupled with visual media of satire and parody, the intricacies of these issues could be better understood, if not at least, popularised.

What’s so endearing and enduring about spoofs or parodies is that they not only make you laugh, but they make you think as well. That’s their charm: the audience knows that there are more realities than the one that’s presented on stage. With the standardization of image-manipulation in interpersonal and mass communication, playing with reality has been launched to a grand scale. The ability to tweak reality has now become a new and important skill for today’s generation and is increasingly interwoven in our daily lives.
Technological advancements have changed the way we see the world — literally and figuratively. On one hand, we are now equipped with the capacity to see what was once invisible or inconceivable. Think of quarks, dying stars, embedded journalism, Google Earth. On the other hand, the same technology has enabled us to select, manipulate or hyper-focus our realities: in the name of glorifying beauty, protecting civilized sensibilities, promoting commercial interests or exposing the next great evil menace. Technological trickery or mastery of reality? The boundaries in-between are thinning, sometimes shifting and merging.

What I personally like about posters such as this — especially movie posters — is how real events can be constructed to fit perfectly within its fictional parameters. Something imaginary such as Star Wars is used both as a creative and communicative handle to re-present the reality of the war between the American government and its proclaimed enemies.

A bit funny but characteristic of today’s society: something fictive remediates something real. Image-manipulation software has, in the case of this poster, enhanced such a representation of reality. It possesses a filmic realism comparable, for example to the effects in Forrest Gump. (Lister 2003: 156) However, this same technological wizardry has also been widely used outside the boundaries of cinema to spread false perceptions, such as of beauty, world events, politics, development, etc. The paradox this presents is that with the development of visual culture and visual technology, the authenticity of images is also questioned.