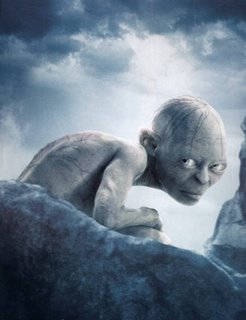 I love everything LOTR; not just Legolas, but even Gollum and Sauron. But after seeing Jackson’s LOTR, I’ve become unexpectedly a real fan of Gollum. Its/his performance in the film was truly touching. Yep, ‘its/his performance’, because Gollum wasn’t just purely a CGI; as everyone knows, he’s also the product of Andy Serkis’ acting commitment. Gollum was a performance-based digital creation that “acted” as much as any actor in the film — probably the most actor-driven digital creature that has ever been used in a film. Andy Serkis’ performance on set was digitally remade using his movements and facial expressions to animate the Gollum that would ultimately “act” in the scenes. (http://www.serkis.com/cinlotr.htm)
Gollum was the synthesis of motion capture photography, computer generated imagery and digital sound mixing. Truly, a new visual effect.

Although Gollum doesn’t really exist (I hear objections), viewers approved, accepted and sympathized with his character primarily because of its photo-realistic quality. His representation wasn’t produced by just photographic techniques, but if Gollum would in fact exist, he would look like the film’s Gollum. People accept it “…because it conforms to prevailing or emergent realist notions of screen spectacle and fantasy, not the ‘real world’.” (Listers 2003: 140)

The existence and accessibility to digital imaging and CGI’s was a great determining factor to the feasibility of filming LOTR. The wondrous creatures and beings of Tolkien’s world could at last be rendered realistically, thereby also lending authenticity to the film. Developments such as these, also reflect from a cyberculture perspective, a distinct phase in Western culture view where “…computer modelling of ‘3D’, ‘photo-realistic’ environment and characters is seen as ontologically distinct from photographic representation.’ (Listers 2003: 147)

In the world of games, special effects, digital animation and CGI are also on the path to achieving more and more verisimilitude. Although majority of the games still possess a distinct hyperrealist aesthetic — edgy, chiselled figures, cartoon/animation colours and hues [you know the real world doesn’t appear like in these games!] — the newest technology is certainly pushing towards a heightened sense of verisimilitude. The uncanny likeness to external reality of environments combined with photo-realistic images of characters and objects marks the newest games. With the use of next-generation technology and A.I., the gaming experience is set to reach another crossroad. Check out the demo videos of the game, Oblivion (especially the forest-scene) and you’ll see what I mean. http://www.elderscrolls.com/home/home.htm