My last post about slow life and the long now made me think about the late Dutch artist, Gerrit van Bakel, and his famous artwork/creation, the Tarim Machine. 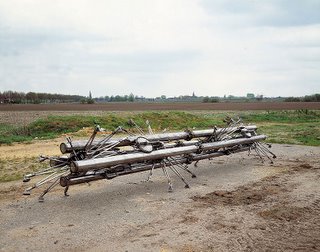 Gerrit van Bakel wanted to change the world, redesign it according to his vision, and bring humanity, nature, art and technology in harmony. Turning his back to traditional art, he dedicated himself to the ever-changing world and the fading away of old things. The technological aspect of the artificial fascinated him. He liked researching and reflecting about how humanity invents things and how these things become intrinsic to this world. Technology was thus a source of inspiration for and the means to create his art. Machines form a great part of his works. The Tarim machine is one such testament to Bakel’s fascination with technology.

The great role that technology played in his artwork didn’t hinder the artist’s poetic vision. On the contrary his artworks embody such fascinating metaphors and stories that many people termed his creations as ‘poetic machines’.The Tarim Machine, for example, can be considered a poem of epic proportions. Bakel’s intention was that this machine would cross the Tarim Basin in Tibet, an area that is almost as big as the whole of Europe itself. But where lies the poetry here? In its irony: the Tarim Machine will be able to complete its journey in about 30 million years. Instead of using technology to bestow amazing speed, he created movement in slow motion. Very, very slow motion. It’s a manner of letting us see the invisible movement of nature, just like how the earth moves and yet we don’t feel it.
This echoes the artist’s critic of the focus on technology. The Tarim Machine is his way of emphasizing the relativity of time and movement. It’s his way of questioning the concept of existence and the role that technology plays in furthering this concept. Time and movement, humanity and nature find here a common ground. He illustrated this point by describing how the machine would affect us in the future: “Een grootvader zal tegen zijn kleinzoon zeggen: Zie je die machine, die komt eraan. Je moet tegen jouw kleinzoon zeggen dat hij zijn hutje iets naar links bouwt, anders rijdt de machine er overheen.” (A grandfather shall say to his grandchild: Do you see that machine over there? Well, it’s coming your way. You should tell your grandchild to built his hut a little bit to the left. Otherwise the machine will drive through it.)

This way of seeing actually presents the respect that can be achieved between humanity, machine and nature. The grandson should try to adjust and not just change the direction of the machine. On the other hand, the machine moves so slowly that its speed becomes organic — innate with nature — that the grandson gets the chance to prepare and adjust for the coming change. And that relationship I call art.